Skip to content
A 2018 BenQ home cinema advert begins with a white middle-aged man (with whom the target market is presumably meant to identify) settling down in an armchair next to his projector to watch three cinematic clips, each with carefully managed near-monochrome colour spaces. The first, captioned BLUE MONDAY, stands for introspection, solitude, and melancholy; the second, RED VALENTINE, for passion, drama, love and loss, the third, GREEN MIRACLE, for the awe of the natural world, as embodied by the aurora borealis, whose cosmic light phenomena BenQ are at pains to analogise with their new digital light processing (DLP) projector. The ad then cuts – in a manner popularised by late twentieth century shampoo commercials – to a computer animation of the internal technics of the projector. This sequence begins with a close-up of the viewer’s eye that quickly fades to a similar perspective on the projector lens. Beams of white light flash across the screen as the camera appears to track back into the machine, falling on a spinning colour disc divided into 6 segments, two each of red, green and blue (RGB). Moving alongside this disc, the white light is shown as consisting of these three primaries. We cut to a second animation, this time of a digital micromirror chip seen from above, a saturated spectrum of digital light reflects of its surface with an accompanying swoosh, as the earnest voiceover informs us that “only true colours convey the deepest feelings”. At this point the ad cuts back from animated to cinematographic images, now in saturated technicolour, flashing between clichés of strolling through the Casbah, a sunset embrace, playing in autumn leaves, a newborn yawn, a kiss on a window pane. Obscured behind its hackneyed equivalences of emotion and colour, and yet hinted at by the knowing analogy between human eye and projector lens, is a far deeper historical and technical connection between physiology and projection. As Henning Schmidgen has shown this connection in fact dates back beyond the invention of cinema to 1872 when German physiologist Johann Czermak pioneered the use of projection in what he called his Spectatorium: “a fragmentary cinematographic apparatus consisting of projector, screen, and rows of seats”. In this mediatised version of an anatomy theatre “cells, tissues and organs functioned in the place of recordings on celluloid” (p44). Schmidgen goes on to describe an arrangement of an eviscerated frog’s heart, two mirrors, lenses and a light source that projected an enlarged image of the contracting heart – removed from the frog’s body but still connected to its nerves – onto a screen above the audience. 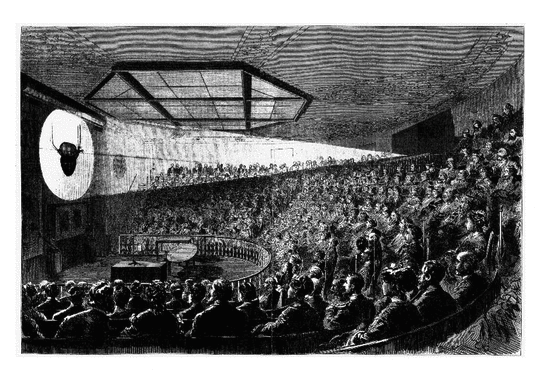 In the decades that both preceded and followed this anecdotal convergence of projection and physiology, experimental discoveries about human physiology were made by, among others, James Clerk Maxwell and Hermann von Helmholtz which comprehensively undermined the conception of human sight as objective and transparent, insisting – and indeed proving – its complexity, subjectivity, and its flaws. In these posts I will discuss the technical correspondence between the operation of DLP and human visual perception, with a particular emphasis on how contemporary projection has instrumentalised the knowledge of nineteenth century psychophysics, showing how the technical specifications of DLP projection are derived from a history of the empiricial measurement and quantification of subjective phenomena. This relationship is emblematic of what Jonathan Crary has described as “the reconfiguration of optical experience into synthetic and machinic operations that occur external to the observing subject” (p.226). The literal externalisation of the still beating heart in Czermak’s projections precedes a less violent externalisation of sight in the technics of contemporary projection. However, whereas in Czermak’s Spectatorium the frog heart projections served to demonstrate anatomical function through direct visual reproduction, in the case of DLP, knowledge of human physiology is used to ensure that its operation remains imperceptible to its audience. So, while for Czermak, projection was a transparent tool of instruction, the spectacle of DLP projection relies on the opacity of its technics to maintain the spectacle of its moving image. The psychophysical discoveries of Maxwell and Helmoltz are inscribed in DLP as a series of chromatic principles and temporal intervals within which certain operations must be occur to retain the illusory nature of its image. Whereas in the nineteenth century projection served to reveal physiological operations, projection now uses nineteenth century knowledge to conceal its operation.