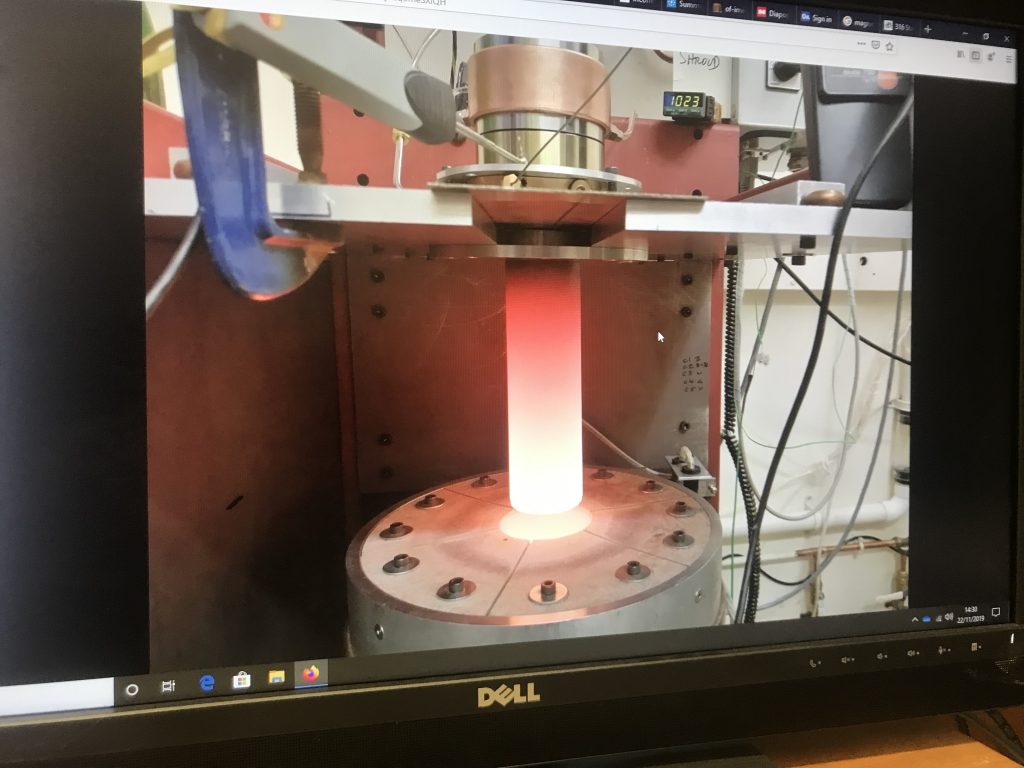 I have recently started an Earth Art Fellowship with the School of Earth Sciences at Bristol University, alongside a group of volcanologists working on what is known – in shorthand – as the DisEqm project. DisEqm stands for Disequilibrium, which I am told is a relatively new concept in volcanology and one which marks a radical break with all previous laboratory models of volcanic eruptions which were based on measurements taking during ‘equilibrium’ conditions, and are therefore irrelevant to modelling conditions during an eruption when all of the variables of temperature, pressure, viscosity etc are in constant flux: disequilibrium.

The team at Bristol have spent the past 3 years building a high temperature, high pressure (HTHP) rheometer. A rheometer is a device that quantifies the viscosity of any given liquid by measuring the torque required to stir it. The challenge in this instance is to build an apparatus capable of stirring a tiny sample of magma that has been heated to temperatures as high as 1400˚C and at a pressure equivalent to that of magma 6km beneath the earth’s crust. What quickly becomes apparent from hearing about their progress is the extent of the artifice required to synthesise these conditions. In volcanological laboratories pressure and scale are inversely proportional: the higher the pressure you wish to emulate, the smaller your sample has to be – for the simple reason that large samples at high pressure are potentially extremely powerful explosives. In this case their sample is just 6cm long and a few millimetres wide. But to work at equivalent conditions to the earth’s core for example, your magma sample must be squashed into a space between two diamonds measuring just a few microns. Processes that occur in a subterranean layer more than 2000km thick are modelled in laboratories on the area of a single pixel of your screen.

In her essay on the ‘Thermocultures of Geological Media’, Nicole Starosielski uses the example of thermal image sensors composed of pure germanium doped with mercury whose sensitivity to infrared frequencies is used in the geological remotely sensing of minerals in the earth’s crust. To render these thermal images the sensor itself must be “cooled to between −243.15 degrees and −196.15˚C… The stabilisation of the thermal environment … in turn enables the remote detection of temperature”. Although a measurement of temperature is not the experimental goal, a similar dynamic is at work in the operation of the HTHP rheometer. To measure the torque required to stir pressurised magma without simultaneously melting your measuring apparatus requires several means of thermal control, primarily through insulation and water-cooling, but also a physical discontinuity between sample and instrument. The magma sample must be pressurised and heated to 1400ºC, the electronics measuring the torque, however, are required to remain at room temperature and atmospheric pressure. So, while in a traditional rheometer the spindle stirring the liquid is the same as that used to measure torque, here the sample must be stirred magnetically to prevent the conduction of heat through the spindle.

Overheating is a common problem in technical apparatuses. The central processing chip of a computer can reach temperatures as high as 400˚C while performing CPU-intensive tasks. To mitigate these extremes of temperature, which would otherwise crash software and permanently damage the chip, a heatsink and fan are clamped against it using thermal paste to ensure efficient transition of heat out of the silicon into the aluminium. Most heatsinks used in consumer electronics are cast from pure aluminium, the quintessential metal of contemporary technologies, and one with good thermal conductivity. This thermal relationship between silicon and aluminium in electronic circuitry is mirrored in the volcanology laboratory. The viscosity of magma samples is governed by the proportion of silicon dioxide (SiO2) they contain, and the crucibles in which these samples are melted are made of Alumina (Al3O2). Computation extracts pure elements from raw ores, refining rocks in order that they can micromanage electron flux, process data, or record an image. But in exploiting their thermal and electrically semi/conductive properties it inevitably imitates lithic processes. The abstractions of computation are as reliant on the properties of the minerals from which they are made as they are on the cultural manipulations performed to those substances. The chemical properties of conductivity, photosensitivity, and inscription play out geologically in earth processes just as they do technologically in media processes.

Petrified Media – a solo exhibition of work developed during my Earth Art Fellowship at University of Bristol’s School of Earth Sciences.