On Sunday I went to see the new Richard Mosse show at 180Strand, and I wanted to write down some of my thoughts so below is what began as a Mastodon rant hurriedly typed into my phone while standing on the train back to Bristol:

Entering the room in which the film’s installed the first thing that screams at you is the format – it’s a 32:9 widescreen-on-steroids projection. I think Akomfrah’s Vertical Sea was projected in this same space during Strange Days, and I have been lucky enough to see Tscherkassky’s Outer Space projected in cinemascope, but this is easily the widest projection I’ve encountered in many years of video-art-audiencing (and part of me feels like Mosse wanted to make sure of this). Of course scale is vital, the subject here is the wholesale destruction of the largest forest wilderness on the planet. To capture that scale – as Mosse says in the accompanying interview text – “you need to get above it” and you also need to dwarf your audience within it. The whole film is immaculately produced, it’s compelling (and exhausting) to watch. It does a good job of evidencing the entangled economic pressures on the landscape it’s shot in: the cattle breeding, the illegal logging and mining, the tourism, the prospecting, the indigenous subsistence. But all of these are rendered and interwoven in gob-smacking cinematic spectacle. Both up close – we see cattle being eviscerated and miners panning for gold – and from overhead – multispectral helicopter shots from a purpose built camera – the apocalypse looks incredible. Of course it does, nothing makes more compulsive viewing than a cataclysm in slow motion. 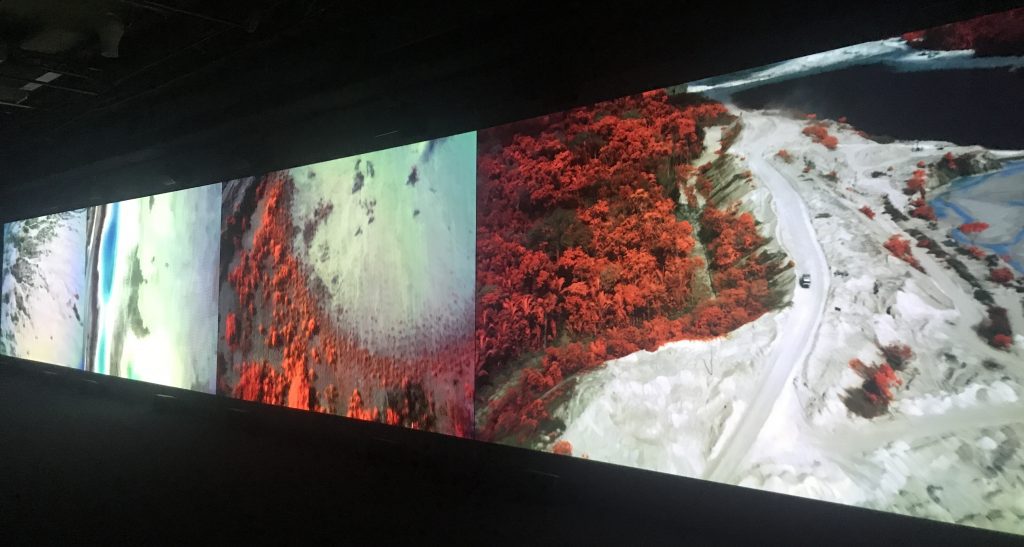 When I saw Mosse’s show at the Barbican I was avidly reading Ariella Azoulay’s civil theorisation of photography in which she tries to establish some space, even agency, for the objectified subject in the interpretation of the image. Mosse’s rather blatant objectification of the strife of his migrant subjects felt deeply exploitative. He stood poised at an untouchable distance from their lives, snatched their torment and tried to treat the resulting footage sympathetically, as if its inherent power dynamic was invisible. Here he does better, although largely through the intervention of someone his lens captures. The only voice that we hear throughout – in fact the only sound given any space in the otherwise grandiose Ben Frost soundtrack – is a furious and impassioned speech delivered direct to camera by a young indigenous Yanomami woman, who excoriates Bolsanoro, the miners and white men for their destruction of the forest. There’s a wonderful moment when she turns her tongue on the film crew stood before her. Just as the London audience can see the budget of this production so can she, and she challenges them to do something with their money, demanding: “Are you here to film us and then do nothing?”. This is the punctum of the whole piece, the moment when the people of the forest speak out against the abuses done to their land not just in the name of profit, but also in the name of art. To his credit, Mosse gives her centre stage, letting the sound recording of her speech run on while the projection goes dark as the crew load more film. But without this woman’s performance would this film be any different in its positioning of its own agency within its chosen subject matter than Incoming was?

Her accusation of the film crew, her implicit equation of them with the miners and with Bolsonaro’s regime raises questions that would otherwise be sidelined: How is Mosse’s film, extracting images from a landscape pushed to collapse in order to build cultural capital in the art world, any different from the extractive mining and logging practices that he documents? Do the good intentions of the project and his and our awareness of the existential nature of the damage shown really make any difference to this fundamentally exploitative action of taking images from one part the world to project them elsewhere? Doesn’t this just reproduce a colonial power structure between camera and subject? Does the helicopter vantage not, again, reproduce a vertical, colonial gaze, a sense of commanding the landscape and occlude – with exception of the thankfully vociferous woman – the embodied perspective of its inhabitants. It’s clear what Mosse’s intentions are, we are to stare into this critical site of the crisis, to face the terror of the ransacking of one the planet’s few remaining forests with all its support of rich biodiversity, an untouched wilderness in which the ongoing speciation of potentially medicinal plants and undocumented creatures continues, its carbon sink capacity. The work is intended to raise the alarm. TJ Demos wrote some years ago that we need to switch from “apocalyptic imagery to utopian prophecy”, about the urgency of imagining the alternative, of prioritising regenerative practice over continually documenting the disaster, whether in technicolour, or, as here, in the vivid multispectral colour shifts used in satellite and scientific imaging. Broken Spectre is a mighty powerful film, but I came away feeling that we are in desperate need of some new models for well-funded camera-toting artists to deal with these subjects that move beyond yet more heart-wrenching documentation of planetary ecology in freefall. We know that we are on the brink and more aerial footage is as unlikely to fix that as adding another lane is to solve the traffic.

In the accompanying interview Mosse makes an excellent point about the role the multispectral imagery techniques he uses play in the crisis, stating that he likes working with what he describes as “aggravated photographic media” that have a role to play in both the conservation and decimation of the Amazon. And yes, the potential of scientific imaging techniques to exacerbate, moderate or regenerate is fascinating, particularly in the context of such contested landscapes as the Amazon. But my question is where the documentary impulse followed by Mosse, and currently so popular among video artists, sits on this spectrum of conservation and decimation? And I can’t help thinking that it fails to tip the scales towards conservation – or to move the goalposts a little: regeneration. How can the arc of consciousness raising, public opinion shifting (which is essentially how works like this might make a difference in the world) keep pace with the acceleration of this current crisis. When will the incremental impact of individual artworks consumed by audiences lead to the paradigm shift required in not only our consumption habits, but also our cultural production habits? It seems to me that if, as artists, we are to set our sights upon tackling the subject of the climate crisis then we must hold ourselves to an exemplary standard of sustainability and decolonialism that adopts and manifests the principles of activity that might actually enable a longevity of cultural production to continue, rather than reproducing in our behaviours the tropes of cinematic spectacle that are after all part of the industrial complex for which gold needs to be panned.

Of course, in writing this I am placing these challenges and questions at my own door more than I am at Mosse’s. It is to his credit that his work is provocative enough that I want to think through these questions, and I would highly recommend everyone see the show, because if this doesn’t catalyse you to think about the role that you play in the collapse of planetary biodiversity, nothing will. I just wish that there was more than the occasional glimmer of critical self-reflection in Mosse’s film.

Petrified Media – a solo exhibition of work developed during my Earth Art Fellowship at University of Bristol’s School of Earth Sciences.